3D printing is a technology that is often highlighted as being more sustainable than other manufacturing methods. It frequently allows parts to be manufactured with less material and lighter weight, for example, and it enables the localization of manufacturing, reducing shipping emissions. While this may generally hold true for the industry and its future, manufacturers and service providers need to play their part today to make it a reality. If enough businesses in the industry take measures to reduce waste and carbon footprints, 3D printing can be a genuine example of sustainability in manufacturing.

There are plenty of eco-friendly steps that can be taken in the 3D printing industry as a whole, but for now let’s narrow our focus. Sustainability has always been one of Nexa3D’s foundational values, as we state our company mission: To digitize the world’s supply chain sustainably.

These efforts are highly concentrated in the design of the XiP, our new desktop 3D printer. The XiP’s effect on the environment was taken into consideration in every step of its development, resulting in a machine that’s sustainable on many levels. 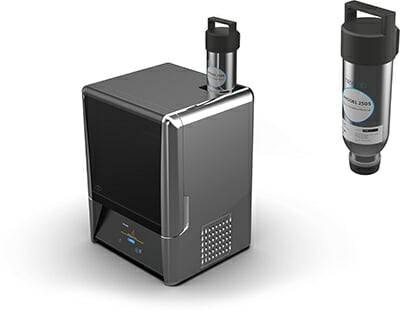 The most visible eco-friendly aspect of the XiP is its overall construction. The body of the 3D printer is made from robust aluminum, one of the most recycled materials in the world. This heavy-duty material means that the XiP will last a long time, even under heavy use.

The aluminum body may be the most noticeable, but the XiP’s high sustainability factor permeates the entire printer. Minimizing waste as much as possible was one of the main goals in designing the XiP, and that includes the waste from consumables. Many resin 3D printers come with a resin tray, or vat, that can only be used a certain number of times before it has to be thrown away. Whether that’s 20 times or 100, it still ends in the creation of waste and the need to buy more products.

The XiP’s vat, in contrast, can be reused again and again thanks to a proprietary two-part design. The frame of the vat is also made from machined aluminum that can withstand heavy usage. It’s designed with a simple clamp system that allows you to easily snap the replaceable Everlast-2 membrane into place – it’s as simple as fitting a lid onto a Tupperware container. The tight seal that it creates prevents resin from leaking, meaning there’s no mess and no waste, on top of increasing safety in the operating environment.

Did we mention the resin bottles? Also aluminum.

The XiP also stands out in terms of its energy efficiency. Eighty six percent (86%) of the 3D printer’s power consumption goes directly to the light engine used to create the part, mainly the LED board. That leaves only fourteen percent (14%) being used for the electronics supporting the rest of the system.

A major contributor industrial waste streams today is the habit of “planned obsolescence”. Unfortunately, in many technological sectors, products are designed to be used for only a certain amount of time before they need to be replaced by a newer, more up-to-date model. Some products even start working more slowly or losing battery power more quickly than they did before, simply because a new model has been released.

We take the opposite tactic – our engineers designed the XiP desktop 3D printer to be modular and easy to upgrade, rather than introducing new models every year or two whenever a new feature is developed. When an upgrade becomes available – for example, to the light engine, LCD screen, or Z-stage – users can implement it themselves on their existing printers, without needing to buy a whole new machine. This greatly reduces waste, particularly electronic waste, which is especially harmful to the environment.

The XiP’s workflow is sustainable from beginning to end. Nexa3D’s xClean, our part-washing material, has a 3X the resin solubility of isopropanol, with little evaporative loss. The material is also recyclable, using vacuum-assisted solvent distillation. Finally, the xClean is safer and easier to transport, as its higher flash point means it doesn’t require shipping in the Dangerous Goods category.

Nexa3D is proud to be a member of the Additive Manufacturer Green Trade Association (AMGTA), an organization aligned with our own mission of promoting the environmental benefits of additive manufacturing. With the 3D printing industry’s inherent sustainability goals, the XiP is a great example of how, with conscious design decisions, the technology can set a green precedent.